Pop Diary: Reviews of "Asterix and the Griffin," "Hacks" and "Save Yourselves"

What I've been reading, watching. 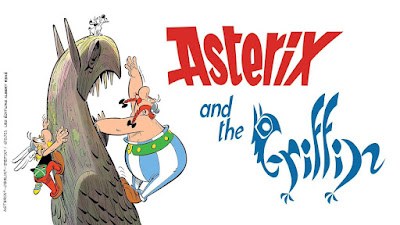 Asterix and the Griffin. As an Asterix fan since childhood, I always get excited about a new adventure featuring my favorite super-potioned Gauls. And new adventures is what we've been seeing pretty much annually since a new team was named to carry on the masterful, classic work of Goscinny and Uderzo.

Those are big shoes, but new writer Jean-Yves Ferri and artist Didier Conrad have now been at it since 2011, and just turned in this, their fifth Asterix collaboration. Like the rest of the team's books, it's not bad, but it's also not classic Asterix (like I was saying, those shoes are pretty roomy...)

Here, our heroes Asterix and his steadfast pal, Obelix, are enlisted by friends belonging to a village in the far eastern region of Barbaricum to retrieve one its members who's been kidnapped by a bunch of Romans because she supposedly knows the location of the mythical, and titular, griffin, which Caesar, being Caesar, wants to display in a circus.

Never ones to turn down an opportunity to beat up some Romans and rescue a fair maiden, our heroes agree to the quest, which is complicated when the magic potion that provides Asterix with his superhuman strength can't be consumed because it's frozen.

There are some funny moments - the frozen potion is a nice twist - and Conrad's art is spectacular, but overall, the laughs are lacking. Ferri likes sprinkling references to our current times into his Asterix tales and here it's a lot of joking references to Amazon and online life that aren't terribly up to date or that humorous, and will only become more dated as the years go by. That's sad when one considers that most of the original Asterix tales still hold up pretty well in terms of entertainment value.

I hope - I guess eternally - that our Gauls' next adventure will be better.

NOTE: The translation of the book I read was published by Papercutz, which got the rights to publish Asterix in the U.S. a few years back, and I was troubled to see that they've changed the name of Asterix and Obelix's druid friend Getafix to Panoramix, as he's called in the French versions. I assume this is to avoid making a drug reference, but that's stupid. 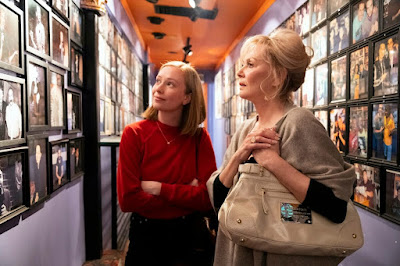 Hacks is a pretty much perfect limited series. In 10 episodes we learn to love two prickly people - Jean Smart as a veteran standup comic whose career is in stagnation and Hannah Einbinder is the smart, snarky young writer brought in to freshen up her act, and we're left with a perfect ending that leaves us wanting more.

Smart's Deborah Vance isn't thrilled about having this whippersnapper thrust into her life, and resents the idea that the younger woman somehow knows funny more than she does, given her long and successful career, and Einbinder's Ava isn't crazy about having to spend time with an unhip has-been. From sparks come fire and, eventually, warmth.

Watching Smart's performance I kept thinking how remarkably talented, and incredibly overlooked, she is. This is a performer who really should've been making features over the past 30-plus years, not confined to TV. But TV these days is pretty great, and here she's found a part of the ages. Einbinder is one to watch, too. The daughter of SNL vet Laraine Newman, she's got great comic timing, but also real depth. 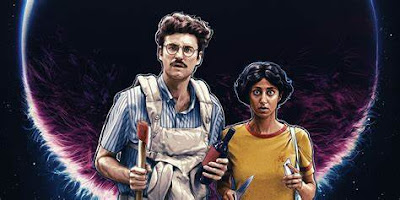 Save Yourselves is one of the most consistently funny comedy films I've seen in a while. Su (Sunita Mani) and Jack (John Reynolds) are hip what-we-used-to-call Yuppies who realize that phone addiction is killing their relationship and, possibly, their very souls.

Sitting on the couch at home, they scroll mindlessly rather than communicating. When they do make eye contact it's only until the next notification dings.

Eager to set things right, they head off to a friend's cabin in the woods with plans to completely tune out. Trouble is, that's when the aliens choose to attack. It takes them a bit to realize this, but they soon discover the entire world - including their cabin - has been invaded by surprisingly formed extraterrestrials.

There's nothing like a crisis to bring people together, and this one does so delightfully thanks to a sharp script, originally executed plot and two extremely likable lead characters.