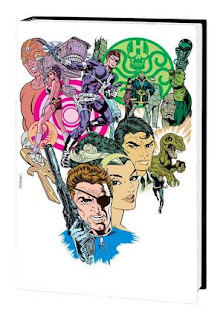 Steranko is Revolutionary! King-Size
Rarely before and rarely since has the comics industry seen a talent as innovative as Steranko. Blending together influences from pop art to Salvador Dali and Will Eisner to Wallace Wood, Steranko's groundbreaking style is an incomparable visual language. Steranko is...revolutionary! Marvel is proud to present Steranko's complete tenure on NICK FURY, AGENT OF S.H.I.E.L.D. in a single, massive King-Size edition that showcases all its glory! These are the stories that defined Nick Fury as the premier spymaster operating in the covert shadows of the Marvel Universe. His awesome tech, his steamy romances, his larger-than-life action-adventure -- Steranko was behind it all, breaking all the old rules of comics storytelling as he went and creating a few new ones too! Collecting NICK FURY, AGENT OF S.H.I.E.L.D. (1968) #1-3 and #5 and material from STRANGE TALES (1951) #151-168. 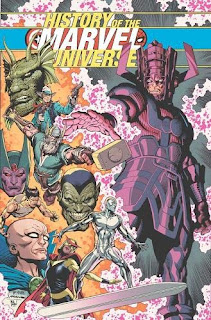 History of the Marvel Universe Treasury Edition
The Marvel Universe is a sprawling, interconnected web of rich history...and now, it's all coming together! Writer Mark Waid and artist Javier Rodriguez chronicle the definitive history of the Marvel Universe from its very beginnings to the modern day - and perhaps beyond! And woven through the moments you know is a brand-new tale featuring previously unknown secrets and shocking revelations, connecting dozens of threads from the Marvel Universe's past and present! From the Big Bang to the twilight of existence, this sweeping saga covers every significant Marvel event and provides fresh looks at the origins of every fan's favorite stories! It's the greatest tale ever told -and a story you've never seen before! 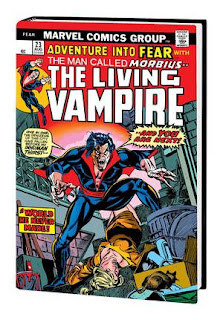 Morbius the Living Vampire Omnibus
Cursed by an experiment gone wrong, Dr. Michael Morbius is possessed by an unquenchable thirst for blood - yet his heart beats like any other man. He is a living vampire! And in this amazing Omnibus, the complete original Morbius saga is collected - from his first appearance through both his first color comic and black-and-white series, and into the rare stories that concluded his tragic tale. The sometimes mad, sometimes misunderstood Morbius contends not just with Marvel's heroes - but with bizarre cultists and satanic demons! Journey to the darker side of Marvel, a world of horror and the supernatural that overtook the industry in the 1970s and defined comics for a generation!
Collecting: Amazing Spider-Man (1963) 101-102; Marvel Team-Up (1972) 3-4; Fear (1970) 20-31; Giant-Size Werewolf (1974) 4; Giant-Size Super-Heroes (1974) 1; Marvel Premiere (1972) 28; Marvel Two-In-One (1974) 15; Spectacular Spider-Man (1976) 6-8, 38; Savage She-Hulk (1980) 9-12; Vampire Tales (1973) 1-5, 7-8, 10-11; Marvel Preview (1975) 8 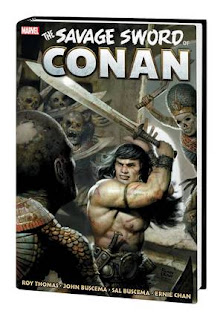 Savage Sword of Conan: The Original Marvel Years Vol. 3
Writer Roy Thomas and Conan artist supreme, John Buscema, are joined by a host of top-tier visual talents--Frank Brunner, Gene Colan, Sal Buscema, Ernie Chan and Carmine Infantino--to tell Conan's most savage tales. This volume's stories range from the young Cimmerian's exploits as a mercenary to his latter days as king of Aquilonia in the iconic "Scarlet Citadel." Anchoring it is Thomas and Buscema's 160-page adaptation of Conan the Buccaneer. It's a high-seas masterpieces that entangles Conan, a vile pirate and a beautiful princess with the forces of Thoth-Amon. Also featuring pinups galore, an exhaustive dictionary of Hyborian era names and places, and the stunningly painted, full-color masterpiece, "The Trail of the Bloodstained God." Collecting SAVAGE SWORD OF CONAN (1974) #29-44 and MARVEL COMICS SUPER SPECIAL (1977) #9. 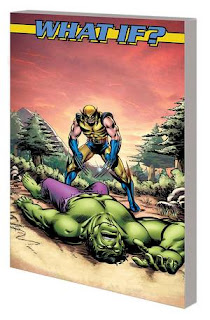 What If? Classic: The Complete Collection Vol. 3
Classic stories reimagined in wild and wonderful ways by legendary creators! Imagine...what if Gwen Stacy had lived? What if Captain America was elected president? What if Phoenix had not died? What if Wolverine had killed the Hulk? What if there were no Fantastic Four? What if Bullseye had not killed Elektra? What if the Avengers were the last super heroes on Earth? And perhaps most startlingly of all, what if Dazzler became the herald of Galactus?! Plus, years before the Clone Saga rocked Peter Parker's world, what if Spider-Man's clone had survived? And yet more trips into the infinite possibilities of the Multiverse featuring Thor, Man-Thing, Ghost Rider, Iron Man -- and Matt Murdock, Agent of S.H.I.E.L.D.! Plus: The hidden history of the Eternals...and a classic all-comedy issue exploring the wildest What Ifs of all! Collecting WHAT IF? (1977) #24-35.