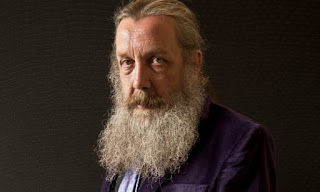 Alan Moore is on a writing tear two years after he'd announced his retirement from writing comics. More in The Guardian.

Bloomsbury, home to the Harry Potter novels, acquired what it described as two “major” projects from the 67-year-old. The first, Illuminations, is a short story collection which will be published in autumn 2022 and which moves from the four horsemen of the apocalypse to the “Boltzmann brains” fashioning the universe. Bloomsbury said it was “dazzlingly original and brimming with energy”, promising a series of “beguiling and elegantly crafted tales that reveal the full power of imagination and magic”.

The second acquisition is a fantasy quintet titled Long London, which will launch in 2024. The series will move from the “shell-shocked and unravelled” London of 1949 to “a version of London just beyond our knowledge”, encompassing murder, magic and madness. Bloomsbury said it “promises to be epic and unforgettable, a tour-de-force of magic and history”.

...“I couldn’t be happier with the new home that I’ve found at Bloomsbury: a near-legendary independent publisher with a spectacular list and a fierce commitment to expanding the empire of the word,” said Moore. “I have a feeling this will be a very productive partnership.”