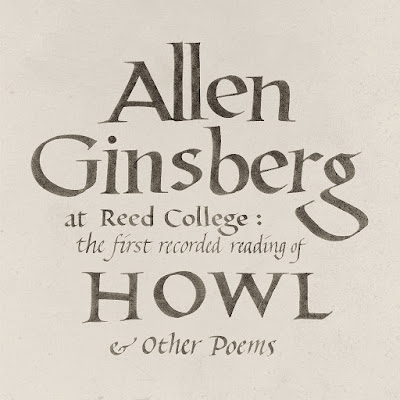 A historic recording, never-before-released, with a fascinating story behind it. You can pre-order it now from Amazon.

Allen Ginsberg’s first public reading of his epic poem “Howl” took place at San Francisco’s famous Six Gallery in October of 1955. Along with Ginsberg, the evening included readings by Gary Snyder, Philip Whalen, Philip Lamantia, and Michael McClure. Poet and anthologist Kenneth Rexroth was the emcee, and Jack Kerouac, Lawrence Ferlinghetti, and Neal Cassady were in attendance. Unfortunately for literary history, no one recorded the Six Gallery reading, and it was long-thought that the first recording of “Howl” was from a reading at Berkeley in March 1956. Before visiting Berkeley, however, Ginsberg had traveled to Reed College in Portland, Oregon, with Gary Snyder to give a series of readings. Snyder and Philip Whalen had been students at Reed and had studied under the legendary calligrapher Lloyd Reynolds. Other attendees of Reed have included Steve Jobs, James Beard, Barry Hansen (Dr. Demento), Barbara Ehrenreich, Ry Cooder, Mary Barnard, Lee Blessing, Del Hymes, Arlene Blum, Eric Overmyer, and Max Gordon (founder of the Village Vanguard jazz club in NYC).

On February 13 and 14, 1956, Snyder and Ginsberg read at Reed, with the Valentine’s Day performance recorded then forgotten about until author John Suiter, researching Snyder at Reed’s Hauser Memorial Library, found the tape in a box in 2007.

To reflect the distinctive culture of Reed College, Reed Professor of English and Humanities, Dr. Pancho Savery, wrote the liner notes and Gregory MacNaughton of the Calligraphy Initiative in Honor of Lloyd J. Reynolds created the cover in the style of what a poster for the event might have looked like hanging on the Reed campus in 1956. Savery’s notes trace the poem’s history and inspiration and highlight differences in this early, work-in-progress version to the final published text.

Reading “Howl” out loud in front of an audience is an exhausting and emotional experience, so Ginsberg warmed up by reading several shorter poems first. The Reed recording includes these shorter selections and most of Part I of “Howl.” The restored recording is crystal clear; you can not only hear Ginsberg turning the pages, but taking breaths after each long line. The audience is pin-drop quiet except for a few places in the reading, for instance, one moment when someone in the audience says something that can’t be heard that elicits laughter, to which Ginsberg responds, “I don’t want to corrupt the youth.” Other lines generate laughter, but the audience is attentive and respectful, allowing for a present-day fly-on-the-wall listening experience. In testimony to how emotionally draining it was to read the poem two nights in a row, as Ginsberg launches into Part II, he stops after four lines saying, “I don’t really feel like reading any more, I haven’t got any kind of steam. So I’d like to cut, do you mind?” Thus ends the first known recording of “Howl”… and now begins its 21st century access for all to hear.